As I mentioned in my previous post, I had a somewhat last minute flight to Vancouver, BC on Alaska Airlines.  Vancouver is gorgeous and I had a great time, but I’ll share more later.

While I could have flown from LAX non-stop to Vancouver (YVR), it is actually more convenient to fly from my smaller local airport and have a layover in Seattle.  This allows me to experience two different aircraft types but also earn me a little bit more miles.  The leg from Orange County to Seattle was on a 737-800 jet with Alaska’s ‘Starliner 75’ livery – a 1940s paint schemed plane celebrating Alaska’s 75 years in business.

The seats are your typical economy class seats in a 3×3 configuration.  Being 6 ft 1, I am fairly comfortable in an aisle seat, as long as the person in front of me doesn’t recline that much.  Because of that, I am always aware of who or what I am reclining my seat into.  This plane’s livery was introduced in 2007, so the seats are probably about that old as well but they still had some decent padding to them.  There is no in-flight entertainment but in domestic economy class, what do you really expect?

The flight attendants were nice and treated the passengers like human beings.  Too many times have I heard about FAs being short and snappy with passengers and I don’t see any reason for it.  The only way I could see an improvement is that they give passengers the can of soda/juice instead of filling the ridiculously small plastic cups.

That wraps up my 737 experience, but what about the second aircraft type I mentioned above?  For Alaska’s short haul service, they use the Bombardier Q400 (aka Dash 8) – a twin engine prop-jet.  Alaska operates this plane as a single class (economy only) plane in a 2×2 configuration.  The seats don’t recline and the beverage service is bottled water, but the cabin is quiet and still seemingly spacious.  While some rows are louder than others, the view is what I like most about this plane.  Some seats have a better view than others due to the engine blocks.  Cruising at about 20-25,000 ft above the San Juan Islands is beautiful.  Everything seems so peaceful down there.  They usually board from both ends of the plane so even if you’re sitting in the back of the plane, you’ll be able to get on and off quickly. 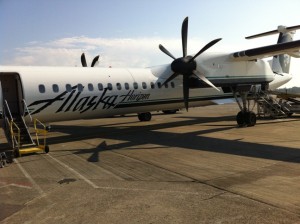 Alaska Airlines is my airline of choice to get to the Pacific Northwest and Alaska.  Your flight will typically be a non-stop flight from most cities in the lower-48 states to Seattle.  Service is friendly.  Also, since they are not part of an airline alliance they have multiple partners so you can earn miles in many different airlines’ frequent flier program.