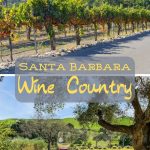 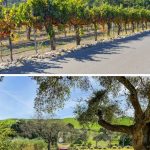 The Sterling Traveler is a reader-supported blog. This post may contain links that earn us a commission when you click on them. While using the links here is option, we would appreciate it if you did.

Everybody knows about Napa, California’s premier wine country. For good reason, of course. It is less known that wine is grown and produced in nearly every county along the coast all the way to San Diego. You could spend months traveling, in California, going to each of the wine regions (or appellations). I’m not exaggerating! Not that many people have the time to do that and if they did. Definitely not anyone I know. The good news is that you don’t have to go to Napa to taste some excellent wines in California. Roughly an hour and a half up the coast from Los Angeles is Santa Barbara. Admittedly, Santa Barbara is by far my favorite place in California. I love going wine tasting in Santa Barbara. It is at the southern end of California’s Central Coast, and it is there that you’ll find wines that are among California’s best.

There is so much to making wine that I can’t possibly go into any detail here. Go read Wikipedia if you really want to know – hopefully after you read this post! The geography, climate, soil, and the vine itself are all elements that help make a wine drinkable.

Wine needs warmth, light, and water. Too much of either one is bad for the grapes making for a bad year for the wine. The climate can also be too cold for traditional wine varieties which is why many of the wines in Canada are hybrid grapes (which can withstand the cold winter temperatures) or ice wines. It’s all about balance. This is why wine is typically grown in more temperate regions.

One of the reasons I like visiting Santa Barbara so much is that the weather is almost always perfect. While it can rain in the winter, there are still days when a sweater isn’t needed. In the summertime, the evenings are typically cool enough where you might want to wear long pants.

This eclectic enclave within downtown Santa Barbara, called the Funk Zone, is a 3-by-3 block area from the ocean to US-101. It’s home to restaurants, boutiques, and about 20 tasting rooms.

Pro Tip: Buy a Santa Barbara Wine Passport to get 2-for-1s and discounts at participating wineries! Get yours here

If you’re not going outside of Santa Barbara during your visit, you don’t need a car. The Funk Zone, especially, is easily walkable, and nearby hotels are plentiful. My favorite places are all on the same block. I encourage you to explore and try new wines. You never know what to expect or end up liking.

Almost right in the middle of the Funk Zone is Area 5.1 Winery. It is by far my favorite in the Funk Zone. While the wine is good, the theme is something of the 1960s Cold War/clandestine operations.

The names of the wines are all play on words that goes with the theme. You’ll taste the Roséwell, Close Encounter, Zinvasion, and others. Do the “Top Secret Tasting”. It includes a taste of the Champagne Supernova. A sparkling wine that is carbonated using the Traditional Method, which is very uncommon in North America.

Food in the Funk Zone

If you’re in the mood to eat, head over to St. Helena Bakery for breakfast/brunch. For lunch or dinner, go over to Brass Bear Brewery. I had one of the best burgers ever. Everyone was surprised when I said I had food there. They had all gone there for a beer and didn’t realize they had made to order food!

Just over the hills to the northwest of Santa Barbara, known as the Santa Ynez Valley, is a small town called Los Olivos. It’s so small, I don’t even think it has a stoplight! What is lacks in population is made up for by the wineries and vineyards that are in Los Olivos.

Side note: a scene from the movie Sideways was filmed at the Los Olivos Market Wine Cafe.

Within the 2 blocks of “downtown” Los Olivos, there are plenty of tasting rooms. My preferences are Coquelicot (pronounced co-klee-coh) and Blair Fox. Coquelicot has a beautiful outdoor area. There are numerous nearby wine and olive oil tasting rooms.

While the town is charming and quaint, the real treat of Los Olivos is several miles away from where the vineyards are. It is as beautiful as southern Spain and Tuscany. I have two vineyards that I never miss: Demetria and Koehler. Both of them have very good wines.

Koehler is the first vineyard you’ll get to after you turn on Foxen Canyon Rd. from Los Olivos. Everyone pouring the wines are very friendly. They can tell you as much or as little as you want about each wine. It’s a laid-back atmosphere and you can walk around with your wine sample. I encourage you to do so, as you’re bound to find at least one cat and perhaps some emus or sheep.

I fell in love with Demetria before I got out of my car. All of my friends whom I’ve recommended it to has fallen in love with it as well. Reservations are required. You have to get buzzed in through the nondescript gate. The villa, where the wine tastings are, is about three miles up the one-lane road through the hills and vineyards. It’s truly gorgeous!

If you didn’t know any better, you would think you’re in the middle of the Tuscan countryside.

Another stop that I recommend doing once is the Firestone Vineyard. I have always found their wines to be not very special. The wines are mass-produced, and they’re one of those “something for everyone” types of places. So why am I recommending this? They give free tours and show how they make their wine. Or at least it was free when I last did it.

There are two things to keep your eye out for on the tour. The first is what they call the Library, which is a room that holds at least one bottle of every wine they have ever made. The other thing to keep your eye out for is a photograph that has Harvey Firestone, Thomas Edison, George Eastman, Charles Schwab, and other famous inventors and magnates of the early 1900s!

My recommendation is to get some food at Los Olivos Grocery outside of town, or a sandwich at Panino then enjoy it while tasting wine at Demetria. Be forewarned, the salads and sandwiches at Panino are large.

Other Surrounding Areas of Santa Barbara

Los Olivos is the least known town in the area to the northwest of Santa Barbara. More well-known towns are Buellton, and Solvang which is a Danish-style town. There are wineries and vineyards throughout the valley and these towns.

I intentionally mentioned the lesser-known wineries that you should go to. I’m honestly not a big fan of the larger corporate wineries, such as Fess Parker and Firestone – not that there’s anything wrong with them! Though, I’ve never had a wine from Fess Parker that I enjoyed.

That said, I hope you at least try my recommendations. I also encourage you to find your own hidden gems while you go wine tasting in Santa Barbara. I have no doubt that they are waiting to be found!

Leave a comment below if you have any recommendations that I left out. I’ll be happy to try it on my next visit to Santa Barbara.

Save this for later by pinning it on Pinterest!