One of the most common conversation topics at TBEX (Travel Bloggers Exchange) conferences is where the next TBEX will be. There are several TBEX conferences held each year: North America, Europe and International (somewhere other than North America and Europe). When I attended the most recent TBEX North America, in Huntsville, Alabama, we speculated a lot on where the next TBEX North America is going to be held. The announcement is typically after the closing keynote. All of the attendees, and myself, waited with a lot of anticipation only to be told where the next TBEX International is going to be. For the first time, it will be in Africa – more specifically, Harare, Zimbabwe! Even though the conference isn’t until 2018, I don’t think I’ll be able to make it, but here’s how you can get there using airline miles.

One of my first blog posts was about understanding airline alliances. This is important to know because you won’t be able to redeem your United MileagePlus miles for Delta or American Airlines flights, or visa versa. However, you can use your United miles for flights on Ethiopian or South African Airways as I’ll demonstrate for you.

In order to keep this post below “War & Peace” length, I will focus mostly leaving from North America to Zimbabwe. The airlines this will cover are:

First, a quick note about Harare, Zimbabwe. It doesn’t have a major intercontinental airport. Most of the arrivals are from Central & Southern Africa. Only two of those airports have flights to other continents. This means that typically a stop in Africa will be needed.

American has a zone-based award chart. This means that no matter where you are in the United States or where you’re going in Africa the miles you’ll need to redeem are the same. According to the award chart, it costs 40,000 miles in economy/coach, 75,000 in business & 120,000 in first. 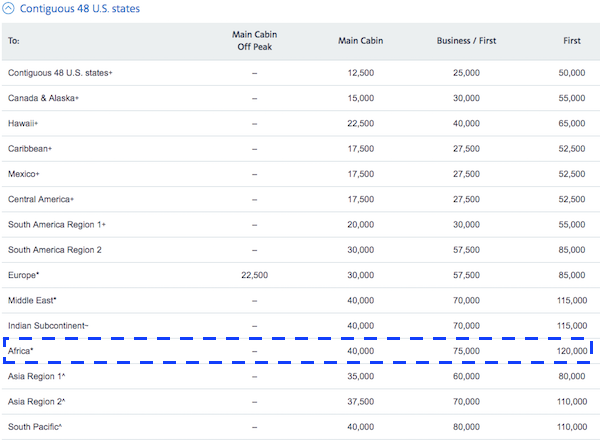 American Airlines does not allow routing via Asia to Africa on award tickets, thus you must cross the Atlantic Ocean to get to Africa. British Airways operates a subsidiary in South Africa, so a flight from Johannesburg to Harare is bookable with miles. From a US international gateway city, you’ll have to fly via London or Madrid to Johannesburg then Harare. 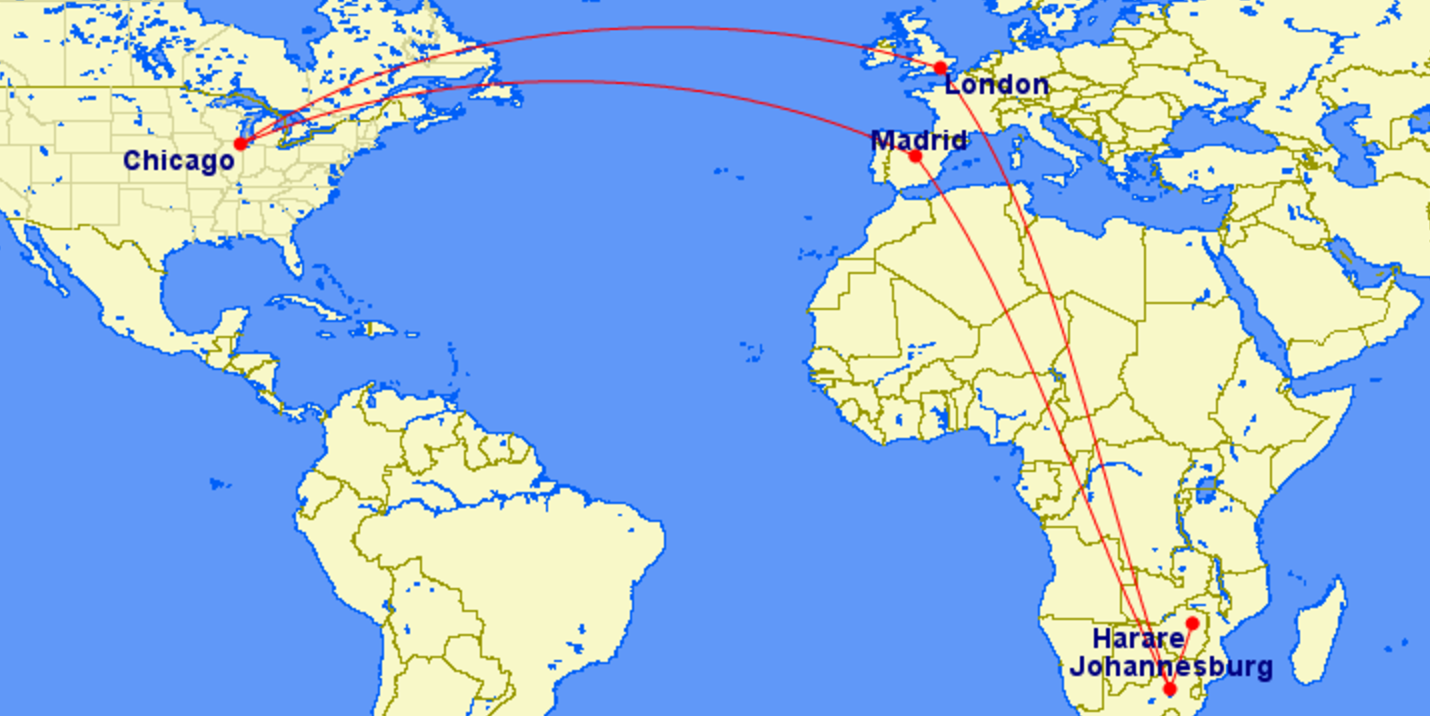 Like American Airlines, United also has a zone-based award chart. The biggest difference is that United charges more when flying in a premium cabin (business/first) on a partner. For Economy class, 40,000 miles is needed – the same as American Airlines. Business class and first class is a bit more than American, at 80,000 and 130,000, respectively.

Since United Airlines is a member of the Star Alliance, it is partners with two major airlines based in Africa: Ethiopian & South African Airways. Both of those airlines fly to multiple destinations in Europe and a couple in North America. If you fly on Ethiopian, you’ll fly via Addis Ababa; whereas on South African then you’ll fly via Johannesburg. Below are just a couple of examples of routes that you can take to get to Harare, Zimbabwe, but there are plenty of others. 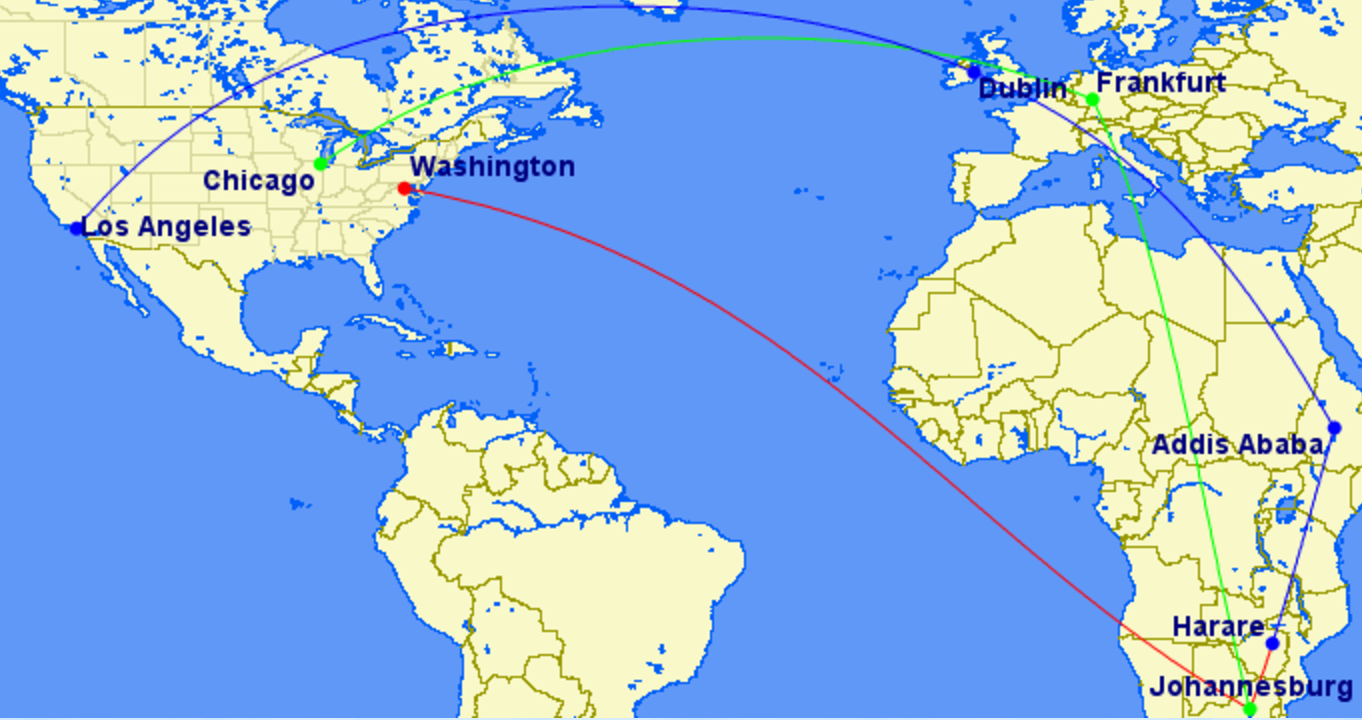 I was able to pull up a couple options on united.com for a random date in August 2017, but most of the itineraries were via mainland Europe and involved 2 or 3 stops.

Unfortunately, Delta no longer publishes their award charts. When searching for award travel on delta.com, you’re at the mercy Delta to price it out correctly, in miles. There is no way to error check the results to make sure the amount of miles is correct, or even reasonable. Delta also only has round-trip award tickets. As a data point, in 2015, travel from US to Africa required 70,000 miles. I expect that has increased since then. If you see available award flights for 80,000-100,000 miles, then it’s probably the correct (and cheapest) pricing – but that’s just my guess.

SkyTeam, the airline alliance Delta is a member of, doesn’t have as convenient coverage of routes when compared to OneWorld or Star Alliance. You’ll likely have to fly at least one flight on Kenya Airways via Nairobi.

In my opinion, this is the least viable option. On Delta’s website, I couldn’t even get a paid ticket to show up at all so trying to find award flights might be futile.  If you want to know what it’s like flying Delta Air Lines long haul, read this review.

While Alaska Airlines doesn’t belong to a large alliance of airlines, it does have a unique variety of partners. To get to Zimbabwe, several partners pop in my mind: British Airways, Emirates, and Cathay Pacific. Each one has pros & cons and has different award charts.

While British Airways has a per-segment distance-based award chart, you don’t have to follow it since Alaska has their own award charts. The difference in miles between economy and business/first is very reasonable!

There is one fairly big drawback to using miles on British Airways. Despite record low fuel prices, they charge a fuel surcharge which increases as the class of service goes up. For economy awards, that surcharge can be $400-700+. Below is one of the many itineraries possible as British Airways flights to London from many US international gateway cities. 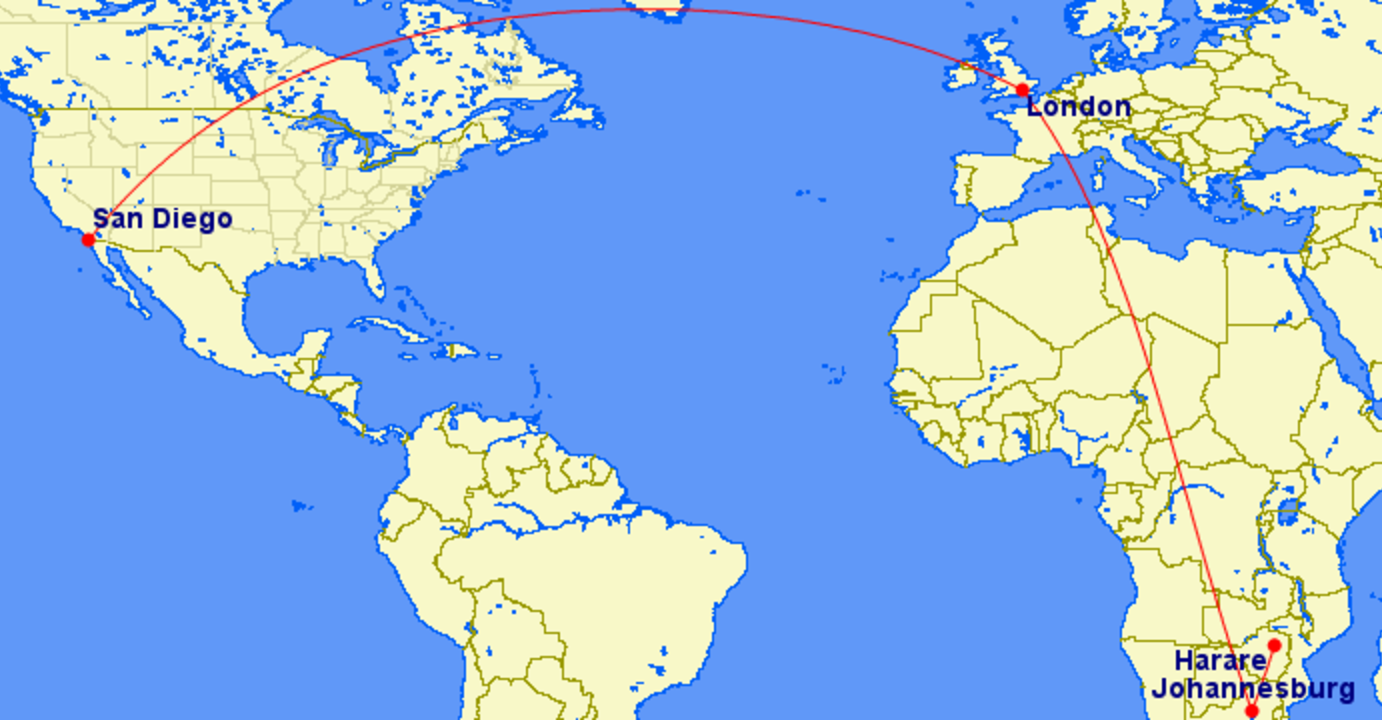 Interestingly, this is the most direct, agony-free, option. Emirates is the only option to get to Zimbabwe with only one stop – stopping in Dubai! An economy award ticket is slightly more than all of the other options I’ve mentioned. The extra 7,500 miles makes up for the one less stop. Unfortunately, Alaska greatly increased the amount of miles for business and first class tickets.

This is the only option traveling across the Pacific Ocean. As is the case with British Airways, the difference between economy and premium cabins is fairly minimal. Finding award space on Cathay Pacific might be sometimes difficult as well.

You’ll notice that the routing only takes you as far as Johannesburg. Alaska does not allow mixing of partners on one award. The final leg, to Harare, is on British Airways’ subsidiary. Since the distance from Johannesburg to Harare is quite short, it is just 4,500 British Airways miles, or Avios as they’re called.

Congratulations if you made it this far! I know this was a long and dry read but hopefully it was useful. If there’s an airline I didn’t mention, let me know. I promise to get back to you.

If TBEX in Africa is anything like TBEX in Huntsville, then I’m sure it will be a blast. Are you planning on going?