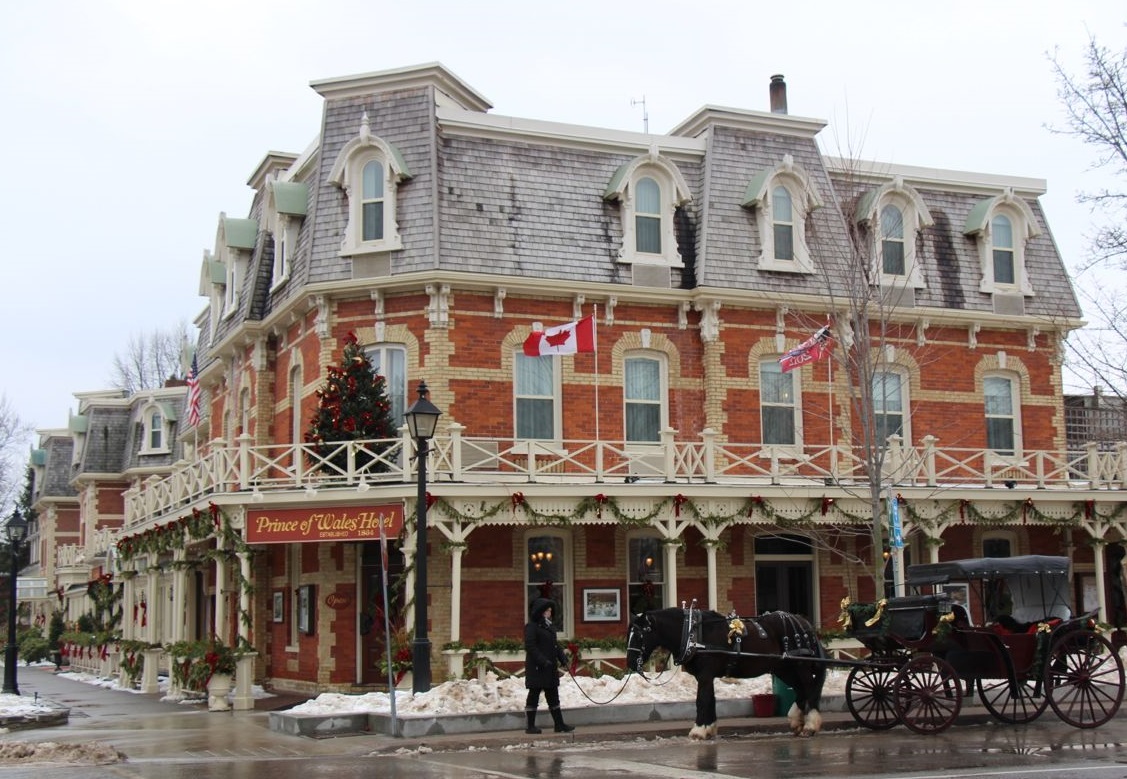 Planning Flights to Toronto, ON
LAX-DFW on a 767-300, or not
DFW-YYZ on new AmericanAir A319
Prince of Wales Hotel
Niagara Falls
YYZ and American Air 737-800

Located on the shore of the Niagara River and Lake Ontario, you’ll find Niagara-on-the-Lake – a small town that is full of charm and history.  It is about an hour drive from Toronto and about 20 minutes from Niagara Falls.  Upon arrival there I no longer felt that I was in the 21st Century.

The town was founded in 1781, originally named West Niagara, as a British military base.  It was a haven for British loyalists fleeing the United Stats following the Revolution.  The town played a pivotal role in the War of 1812.  The American forces took it after a fierce battle, then shortly after, burned it to the ground and retreated back to Fort Niagara on the other side of the river.

After the war, the undaunted citizens rebuilt the town.  Though not officially adopted until 1970, the town was renamed, to its present name, around 1880 to distinguish itself from Niagara Falls.

Today, there are numerous wineries nearby, most of whom produce the region’s ice wine.

When I was walking around Niagara-on-the-Lake, I felt like I had been transported back to the 19th Century.  The entire town’s architecture was all Second Empire and Victorian , including the lamp posts.  The town even pays homage to its historical roots by flying a 15-star American flag (the flag during the War of 1812).

The entire town is very charming.  One of my favorite stores was a jam store, Kurtz Culinary Creations that let you have free reign to taste everything!  There is even a museum set up like an old apothecary.  I would have loved to go in but it is, unfortunately, closed on Sundays.

I had the absolute pleasure staying at the Prince of Wales Hotel. Like the town, the hotel is equally historic.  It was built in 1864 and has 110 rooms spread over 3 floors.  The decoration and detail of the interior are as exceptional as they are on the facade.

The service and friendliness of the front desk clerk was unparalleled.  She detailed amenities at the hotel, the main streets of the town to walk around, and directions to Niagara Falls.  All of the hotel employees were very friendly, including the shuttle drivers.

If I had to pick something that would detract from this hotel, I would say I would be nitpicking.  However, it seemed like the room was a little on the small side for two people.  The room was as beautiful as the rest of the hotel.  We even had a four-post bed that was very comfortable.

While I had a very nice time in Niagara-on-the-Lake and at the Prince of Wales Hotel, I’m not sure I would come back for more than a day trip unless I was planning on going to Niagara Falls as well. The reason being is that it is so close to the city of Toronto.  On the other hand, if you are planning on going to Niagara Falls then this town is located very nicely between Toronto and the falls.  Niagara-on-the-Lake is a don’t miss town if you are able to visit.

Click here for the latest rates of the Prince of Wales hotel!