Previously I had talked about sightseeing I did and hinted at the wonderful food Montreal has to offer. Montreal has much more delicious food than just poutine. I often say that when I am planning my travels, I first look at where to eat then I’ll figure out things to do or see nearby. Montreal was no exception.

Poutine is basically the provincial food of Quebec, Canada. You can literally find it almost anywhere in Montreal. Poutine, admittedly, doesn’t sound nearly as appealing as it really is. It usually consists of brown gravy, and cheese curds served over french fries. At most places that serve poutine they will add some other foods to it – such as pulled pork, Montreal smoked meat (which I’ll talk about further down), and other fill ins which make poutine delectable. I got mine from Poutineville which has 2 locations in Montreal. Poutineville serves up many different variations of poutine. I’m sure you can find at least one that won’t disappoint.

As I said, the Mile End neighborhood is known for its artists and indie music. I was there for neither of those. Montreal’s lesser known, yet still famous, food is the bagel. Montreal bagels are rivaled only by New York City bagels. There are two famous bagel shops – St. Viateur & Fairmount Bagels. I had planned on going to both so I could have a comparison. I uncharacteristically got turned around and did not remember which direction walk from Fairmount to St. Viateur.

I did get an iconic sesame bagel, from Fairmount Bagel, with cream cheese and enjoyed it. The bagel was very good! It had been awhile since I last had a NYC bagel, but I’d say that Montreal bagels are at least on par with NYC bagels.

Opened in 1928, Schwartz’s Deli is located roughly halfway between the Mile End and Old Montreal neighborhoods. I had planned on taking the bus to make use of the unlimited metro rides I had, but after waiting for 10 minutes I decided to walk. The walk was nice and took me through some interesting restaurants in Chinatown – one of which served hand-pulled noodles. They looked good, but I was on a mission to get a Montreal smoked meat sandwich.

As you may have guessed, Montreal smoked meat is most closely related to pastrami – a Kosher-style meat (typically brisket) that is smoked with spices. There was a line to get in, but I knew it was worth the wait. Nothing was going to dissuade me!

After waiting about 20 minutes or so (which is just a guess because I didn’t time it), I was seated at the counter. Without even looking at the menu, I ordered my smoked meat sandwich and a cream soda (preferably Dr. Brown’s). Only one problem, or two…. they didn’t have cream soda, and no Dr. Brown’s. So I “settled” on a black cherry soda. I don’t typically order cream soda or black cherry, but in my opinion it’s a staple of Jewish/Kosher-style deli.

My sandwich and soda came moments later. The sandwich was served with yellow mustard, but was still very good! If you asked for yellow mustard at Katz’s in New York, you would have gotten some serious shade thrown at you. Where’s the brown deli mustard?!

As I anticipated, the sandwich was definitely worth the wait. It would be an acceptable substitute for New York deli, but not with yellow mustard. I still prefer the pastrami from Katz’s, which you can read about here.

Le Robin Square is a small family owned and ran restaurant, across the street from the Montreal Courthouse (Palais de justice de Montréal). I looked on yelp and found that they have excellent Mac N Cheese. I’ll admit that I’m a bit of a sucker for great comfort food. They are only open for a few hours during lunchtime and a few hours during dinnertime. I got there at 6 PM and waited in a short line to get in, despite being solo. Everyone working is family or friends of the family. No matter whom I talked to they were super friendly. It was awesome being in a restaurant and seeing everyone being so friendly to everyone they interacted with. They quickly took my beverage order and explained a few things about the menu. All of the food, except for the imported Italian burrata, is locally sourced!

I had come there for the Mac N Cheese. I barely looked at the other items on the menu but they all sounded good. The dish is a heavy cream-based cheese. Even though I prefer a gooey mac n cheese, I still ordered it.

As you can see, there is a TON of food and topped with shredded “Christmas ham”. I wasn’t sure what to expect with the ham. It definitely tasted like Christmas. It had a lot of cinnamon and a bit of clove and nutmeg.  Everything was very tasty. There seemed to be some crunchy bits of spice that I didn’t enjoy. I looked around at what other people were eating, and all of the food looked amazing. Each dish was very big. I could have easily split it with someone and I think other people eating thought the same thing about the food they ordered.

My Thoughts on the Food in Montreal

Overall, I was very surprised that there was so much good food in Montreal. I wish I had more time to eat at different places. If it were a bit cooler, I would have loved to try the noodle restaurant. It looked delicious, but soup in the middle of summer doesn’t appeal to me.

Comment below with your experience visiting a city where you were surprised by the food.

Read the previous posts in this series of my Montreal trip report: 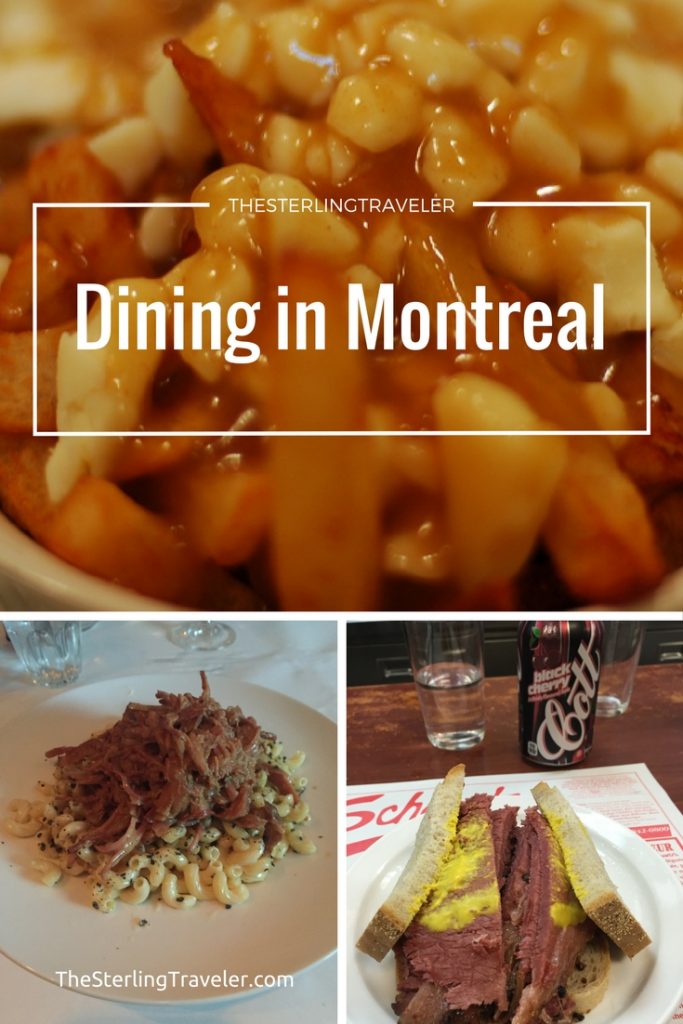