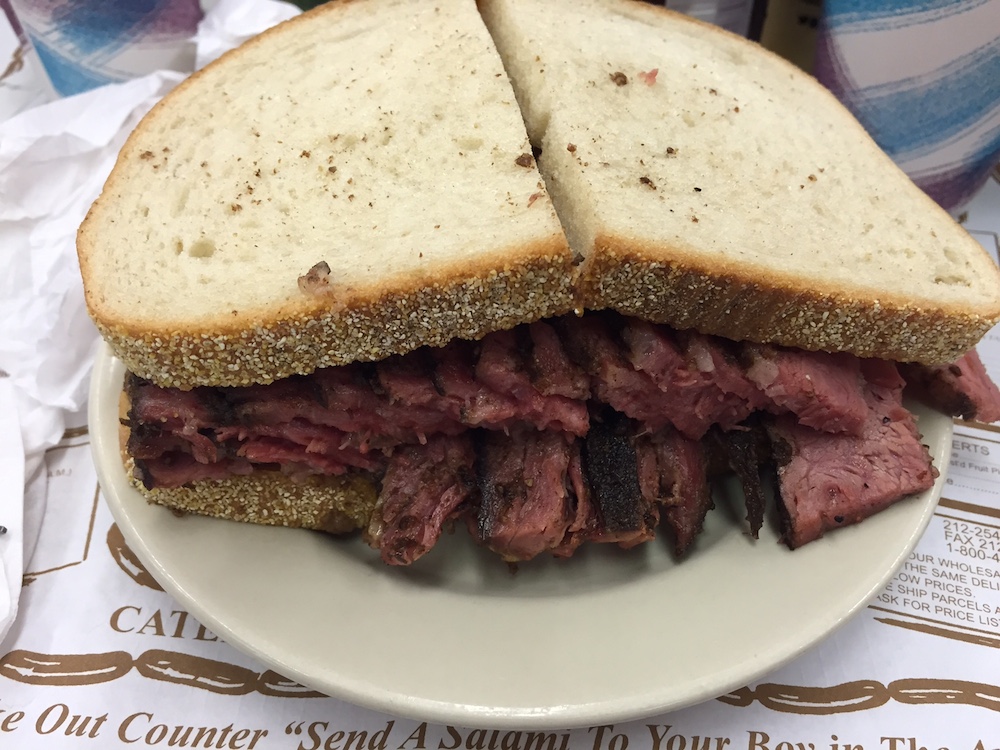 I’ve been to New York City more times than I have fingers and toes. I have eaten at many different establishments and famous foods – bagels, pizza, deli, etc. It is impossible to spend just one post on it – unless I focus on just a few things that I had this last visit.

I have only eaten at Carmine’s this one time, but it is a very well-known family style restaurant that dates back to the 1990s.  Its location, square in the Theater District, makes it an ideal place to go if you have show tickets.  Even if you don’t you’ll still have an excellent meal with A LOT of food. We ordered the grilled artichoke, veal parmesan and eggplant parmesan. The artichoke was very good – I wanted to get the stuffed mushrooms but others that I was eating with don’t eat pork (and I was not disappointed with the artichoke).

The eggplant parm was more like an eggplant lasagna and it was ginormous – almost a perfect 6″ cube! Although, not as impressive in size, the veal parmesan was very good as well and I preferred it over the eggplant.

What can I say about Katz’s that isn’t already well-known? It’s a staple in the Lower East Side and is practically unrivaled, except perhaps Carnegie Deli (in Central Park South) but Carnegie Deli is undergoing renovations.

Looking at the menu, I knew I wanted almost one of everything. Okay, that’s an exaggeration. I knew I would be getting a pastrami sandwich, but I also wanted at least a few bites of matzoh ball soup, and a latke (a potato pancake, but much better). The sandwiches are very filling and everyone else I was eating with was already sharing with others. So I only ordered the pastrami sandwich and hoped that I would get a bite or two of the other foods I didn’t order.

As luck would have it, I got a couple of bites of a latke – fried golden brown topped with sour cream and applesauce. I also saved a bit of matzoh ball soup that was almost sent back unfinished!

The best part was, of course, the pastrami sandwich. You have not lived a complete life until you have eaten a proper pastrami sandwich from a deli in New York City. For those that are unfamiliar with pastrami, please stop reading – we can no longer be friends. Just kidding! Beef (typically, the bottom round cut) is cured and smoked to perfection and nearly melts in your mouth. It is served on corn rye bread with nothing else – deli mustard is acceptable. The other acceptable variation is the reuben – pastrami, with swiss cheese, sauerkraut, and Russian dressing. I prefer to be a purist on this one. One strict rule: don’t ask for mayo – you might be tossed out of Katz’s Deli (not joking!).

I am glad I didn’t order more food for myself; I might have had to have been carried out in a wheelbarrow.

Sure, Junior’s has other food but why bother? I’ve never had anything other than their cheesecakes and, frankly, neither should you. It is within the heart of the Theater District, almost across 44th Street from Carmine’s. There are other locations, but if you’re staying in midtown Manhattan then this is probably the most convenient for you. The 5 of us split 3 or 4 slices of cheesecake.

They are so rich and creamy. I dare you to eat more than a couple of slices!

This one was also a first for me. It was recommended to me by a couple of friends, who live across the river in New Jersey.  I had almost forgotten about it until I caught a glimpse of it while talking with others on the sidewalk.  Of course, I had to try it despite eating cheesecake not 10 minutes prior.  We ordered a couple of their recommended ground beef and potatoes empanada, and got a couple of vegetarian options.

It was around 11PM and we figured they would be pretty quick. Most places in New York City are quick as they want to turn the tables quickly and get more people in and out. After about 20 minutes of waiting around, we started to get a little annoyed. Someone I was with, cough Dad cough, went in to ask – even though I had done so not 5 minutes earlier. He came out with a few bags of empanadas. A quick count told me that either they gave us too many or someone grabbed the wrong order – or at least part of another order. Sorry, Empanada Mama!

I don’t have any pictures, as it was dark and I was devouring each one. I have never had better empanadas. They are only about 3-4 bites big but what lacks in size definitely makes up in flavor. I am definitely adding this as one of my must visit places in New York City next time I go (and the time after that).

Empanada Mama Update: The Hell’s Kitchen location, unfortunately, burned down. You can still order online from that location. I believe it will be reopening. There is another location in the Lower East Site, if you’re still hungry after eating at Katz’s!

New York has tons of really good food. I can’t possibly give these a rating as they’re all must visit restaurants. There are Subways, McDonalds and Pizza Huts – but why bother? Shake Shack (or a dirty water hot dog, street side) being the exception for fast food and even then you can do better. There are always better options. Even if you can’t make it to all of the places I mentioned in one visit, try to have at least one (or two) next time you’re in New York City. You won’t regret it.