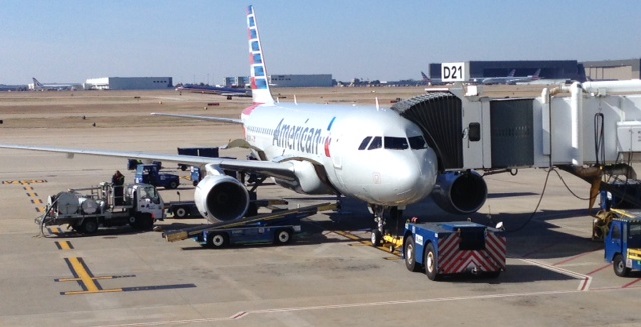 Planning Flights to Toronto, ON
LAX-DFW on a 767-300, or not
DFW-YYZ on new AmericanAir A319
Prince of Wales Hotel
Niagara Falls

I had a few hours to hang out at DFW (Dallas-Fort Worth) Airport.  One of the things I like about spending time at DFW, or almost any other airport in Texas that I have been to, is the food.  There is usually decently good BBQ.  Not going to say it’s good or great because, well… let’s face it, it’s airport food.  But it is better than a lot of the BBQ in California.  This time I had a brisket sandwich from Cousins BBQ.  The mashed potatoes could be improved but the sandwich and beans were pretty good.

Looking back, I was lucky that I was transiting DFW that week – not the week after.  There was a big freeze the next week, in Dallas, which caused many flight disruptions.

My flight to Toronto Pearson Airport (YYZ) was on an American Airlines A319, which has been in service by AA since around mid-late September.

I was really looking forward to this flight since it is a relatively new airplane.  It has AA’s new In-Flight Entertainment system.  At the time, all movies were complimentary because of an introductory promotion they were having. Along with the new IFE system, there is also in-seat power, with USB which allowed me to charge multiple devices at the same time.  My apologies for the bad picture…other light sources (such as an open window shade) can produce a strong glare on the screen.  The icon in the middle of the screen is a tub of popcorn (for Entertainment/Movies), not an overfilled trash can.   The touchscreen was pretty responsive.  Also, I didn’t feel the person behind me pushing on it.

I wish I had taken a video of the takeoff roll as it was probably one of the quietest takeoffs I have ever experienced.  Even in flight the cabin is relatively quiet.  I enjoyed a movie and a couple of TV episodes on the flight which made it seem like it was shorter than the scheduled time.

I quite liked the A319 and hope I can fly it again soon.  I am happy that the routes they are on were once flown by MD-80s.  However, one drawback on this aircraft is that there are only 2 rows of seats in First class.  This makes it harder to score upgrades for elite frequent flyers.  I wasn’t eligible for an upgrade but I was able to pick a seat in the Main Cain Extra section which is only 3 rows.  Based on what I have heard, row 9 is the best as it’s not a bulkhead seat and you’re still as far away from the person behind you as you are in front of you so you still feel like you have your personal space.

Don’t forget to subscribe to my blog, on the right, so you don’t miss the next part of this trip report: Niagara-on-the-Lake and the historic Prince of Wales Hotel.